Gender in Singapore Advertising: A Study by AWARE and R3

Women make up 39% of the global workforce. Singapore surpasses the global average with 60% of  working-age women engaged actively in the labour market. This ratio has been steadily increasing from 28% in 1970. Why is it then that Singapore advertisements are 6 times more likely to show women doing domestic chores than men, and men are 32% more likely to be featured in lead roles? To better understand this disparity, leading women rights organization, AWARE, and marketing consultancy, R3, undertook a study to review current practices in gender portrayal in Singapore commercials with the aim of making brands more accountable towards gender equality in their advertising.

200 television advertisements were reviewed and scored across four key attributes:

These advertisements were produced by Singapore’s top 100 advertisers, which represents a wide range of industries. These ads were broadcast between 2018 and 2020. Each advertisement was scored independently on a scale of 1 to 5 by AWARE, R3 and a panel of marketing industry leaders. The lowest score (1) was given to work which actively and consciously strengthened a negative stereotype of a gender. The highest score (5) was attributed to work that had made active and conscious efforts to break negative stereotypes. 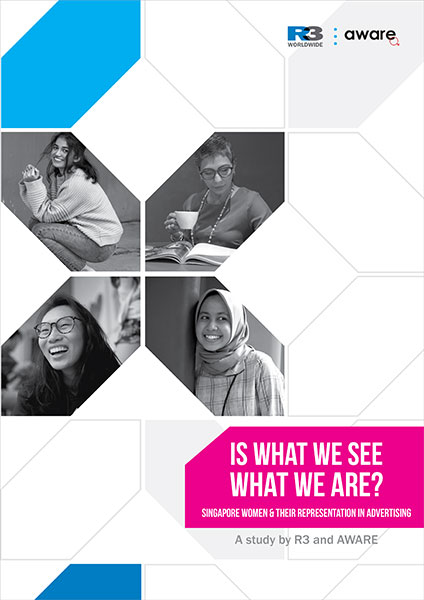