What Do Advertisements Tell Us About The State Of Gender Relations In Singapore? 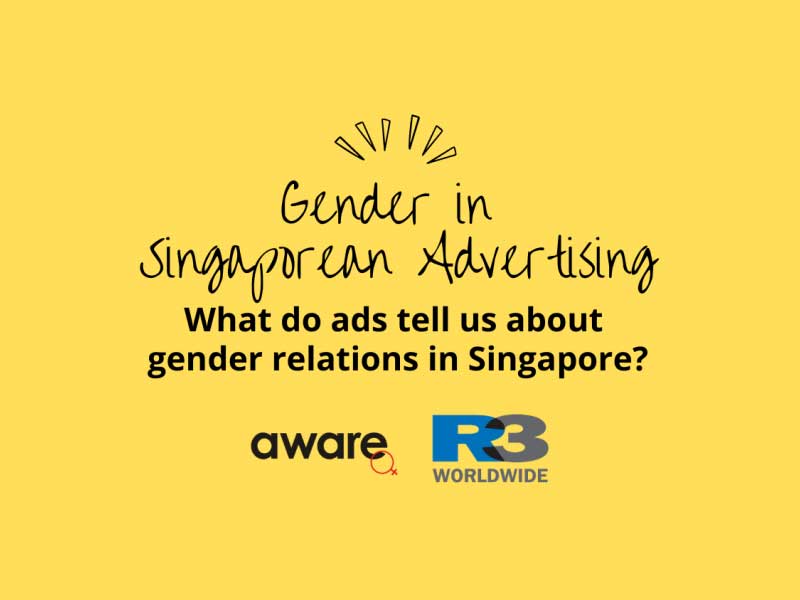 This article is written by Kelly Leow, Communications Manager at AWARE.

Recently, gender-equality organisation AWARE and marketing consultancy R3 embarked on a project to analyse gender portrayals contained in Singapore commercials. We looked at 200 television advertisements spanning a range of industries, including telecommunications, financial services, beauty and government. They were produced by Singapore’s top 100 advertisers, and broadcast in Singapore between 2018 and 2020. From this sample, we aimed to develop a snapshot of gender relations in Singapore today.

We set about identifying a shortlist of ads that could serve as exemplars for gender equality. While guidelines on gender portrayal have been published for advertisers in other countries (e.g. by the Advertising Standards Authority in the UK), there has been no such endeavour in Singapore. We therefore hoped our list would give local advertisers a nudge to think more critically about their own depictions of gender.

First, we tallied men and women in lead and supporting parts across the 200 ads to derive a ratio of male to female characters. We also listed out some common roles relating to gender and power—such as “expert/novice” or “saviour/saved”—and tallied the characters who fell into those roles. Finally, in evaluating individual ads, we considered their treatment of gender stereotypes, beauty standards, violence against women, and sexual objectification.

Our first exercise, meant to indicate representation, was immediately disappointing. The 200 ads featured 23% more male lead characters (179 vs. 146), and 8% more male supporting characters (328 vs. 304), than female.